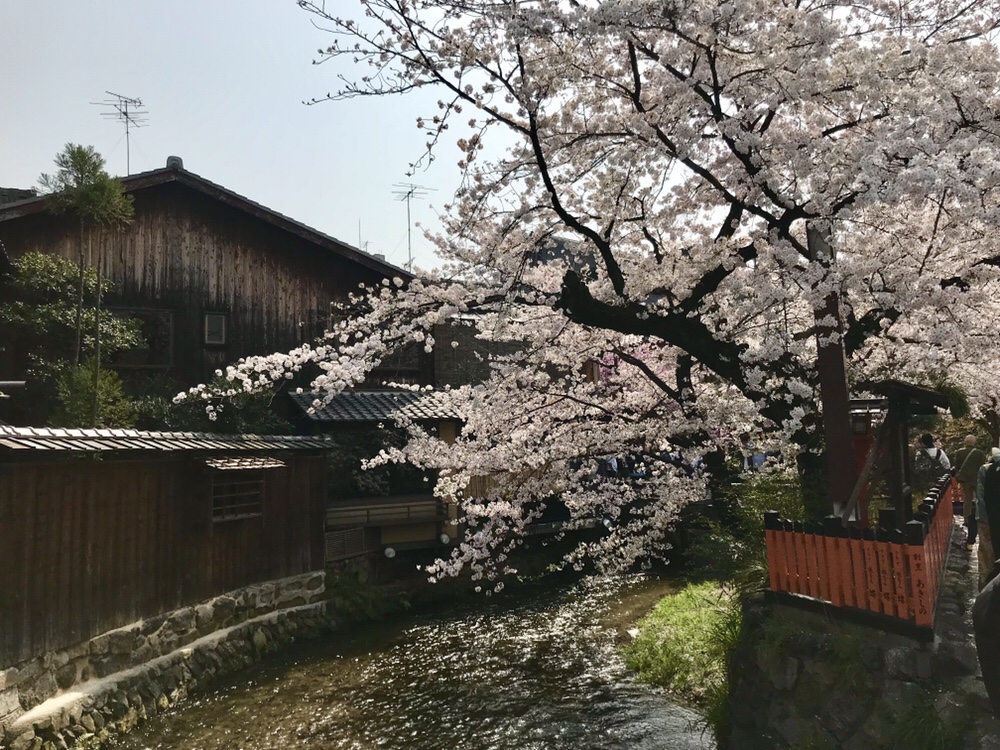 Our Awesome Trip to Japan 2018

Spent the Holy Week with some of my highschool friends in the Kansai region of Japan. We had a flexible itinerary which we adjusted each day; some based on our energy level, some upon spur of the moment 😁

I used Sygic Travel mobile app to manage our itinerary and move schedules around. The app also provides information about places to visit, hours of operation and entrance fees, if any.

We used various passess and travel cards to get around.

We used the “Haruka+ICOCA” set for a discounted ticket to the Kansai-Airport Express “HARUKA” (worth ¥1,400, but costs ¥1,100 with the set) which provides direct access from Kansai-airport Station to Tennoji, Shin-Osaka and Kyoto Stations.

Along with the set is an ICOCA card, which is a pre-charged integrated circuit card (worth ¥1,500, with ¥500 security deposit that can be refunded when you return the card) that can be used for JR, subways, private railways and city buses across Japan as long as it bears the IC or ICOCA icon. It can also be used for payment in convenient stores, shops and restaurants in train stations and at the airport.

The set is worth ¥3,100. Instead of the regular ICOCA card, we opted to get the Kansai One Pass which has the Astroboy design.

Picked up the actual Haruka tickets and IC cards at the JR ticket office outside the airport, near the entrance to the train platforms.

We used 1-day (P914) and 3-day (P2,276) JR Passes to get to Kyoto, Nara and Kobe from Osaka. We were supposed to do a non-consecutive day trip to Kyoto, hence, the separate 1-day pass, otherwise we could have gotten the 4-day pass. Bought both passes via Klook and picked up the passes at the H.I.S. Counter near Northern exit at the Arrival area in KIX airport.

Tip: Klook offers discounts and vouchers that you can use for future purchases (cheaper than buying directly from JR website or via travel agency). Also, you can use the voucher sent to the mobile app in picking up the actual passes (no printed copy needed).

Bought a 1-day pass (¥600) at the Kyoto Tourist Center to get around Kyoto via city buses on our first day trip.

To get around Nara, we took the Nara City Loop buses from Nara JR station using ICOCA card for payment.

The recommended taxis in Kyoto based on this blog are MK taxi and Yasaka taxi for the English speaking drivers. The same taxi companies probably operate in other cities, too. The flag down rate is cheaper, though, in Kyoto than in Osaka (¥590 vs ¥670); an additional ¥80 is charged for every 415 meters. For groups of 4 going on trips that are 4km or less away, it is best to take a taxi than a train or bus which costs ¥230 per person.

Used a mix of the following websites to know which trains/subways/buses to take:

We opted to stay at a Ryokan style home via Airbnb. It gave us the full experience of living in Japan.

The space was good enough for 8 adults and 2 kids. 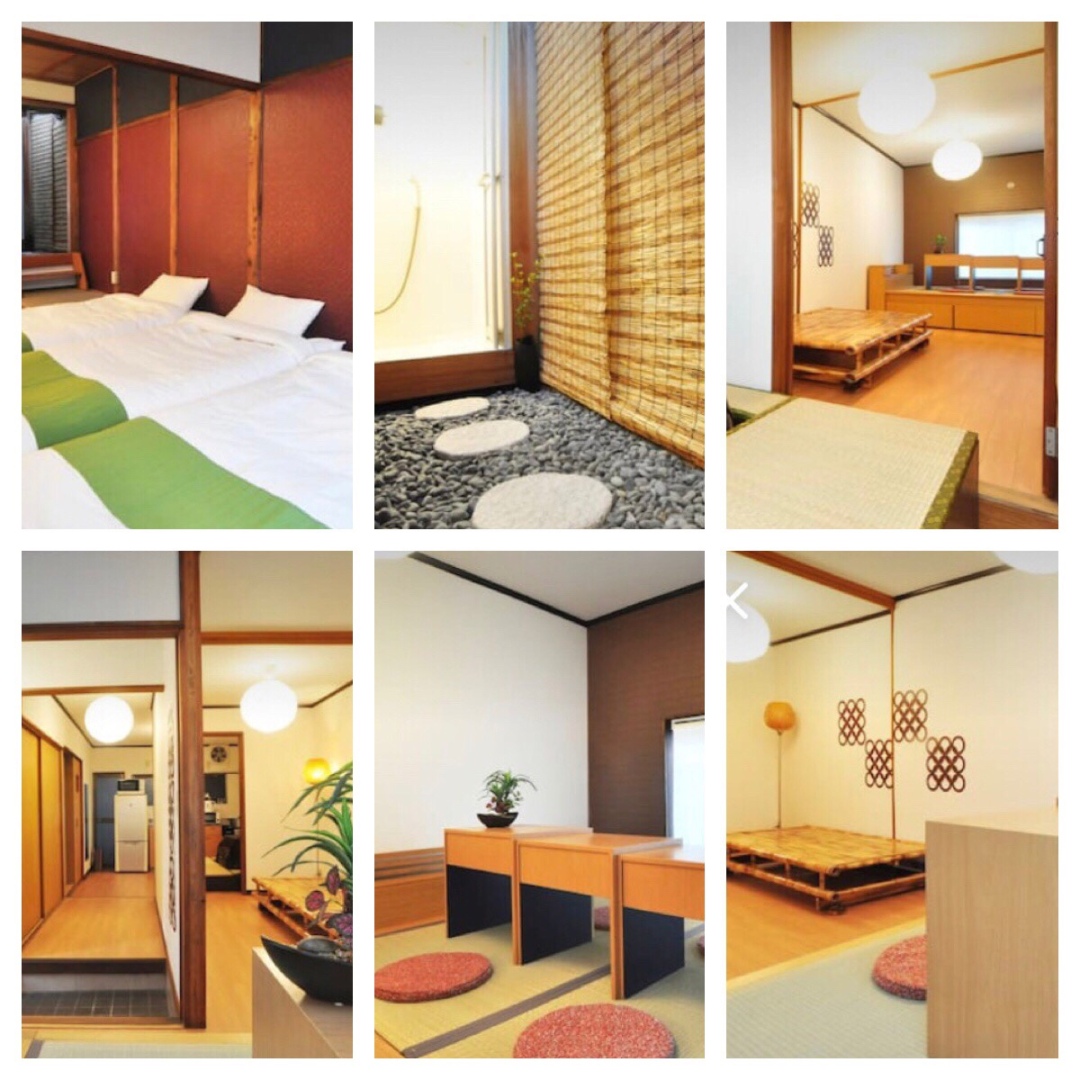 The place was pretty close to JR and Nankai train stations as well as Osaka subway stations (6-minute walk). There were 24-hour convenience stores (Lawson and Family Mart) and supermarkets nearby.

Our default place for lunch and dinner in Osaka was Shinsekai which was 15 minutes away on foot from our airbnb place. It is also where the Tsutenkaku Tower and Spa World are located, but we did not get to enter both.

One of the main attractions in Osaka is the castle, which also has hundreds of cherry blossom trees around.

One of the few Universal Studios theme parks with a Harry Potter area. A recent addition was the Minion Mayhem Park, which lives up to its name. 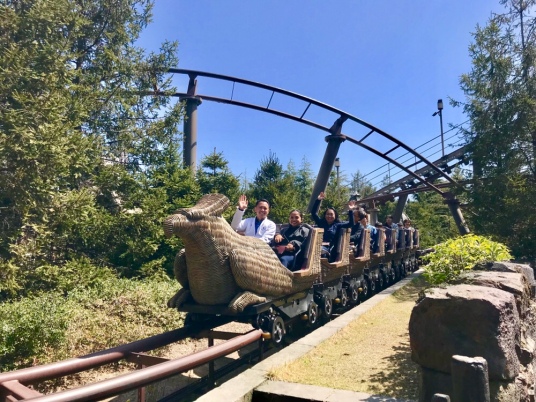 Namba is a great place for shopping with its long line-up of stores, restaurants and gift shops. There were only a few Money Changers in the area and not all accept credit card for payment; it is best to have some yen ready when you go there.

Be sure to check if store offers tax free payment so you can get a refund. It is only available to shoppers with foreign passports and landing permission stamp. 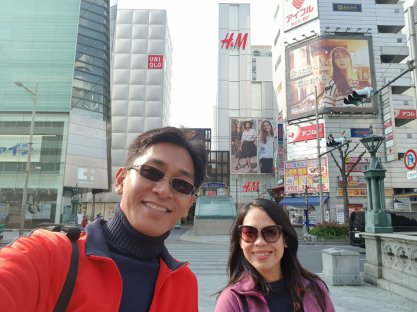 We also discovered some great restaurants near Namba Parks. 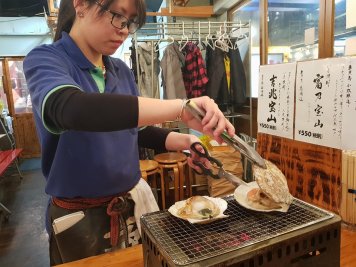 Kyoto has more sighseeing places with all its temples and castles that are among Unesco’s World Heritage list.

You need to get a ticket worth ¥400 to enter. Some cherry trees have not blossomed yet when we visited and the viewing deck was under construction. It did not stop the throng of tourists, though, from visiting it.

From the temple, we strolled through Ninenzaka Path. This area has more preserved streets and traditional shops selling all kinds of local foods, crafts and souvenirs. 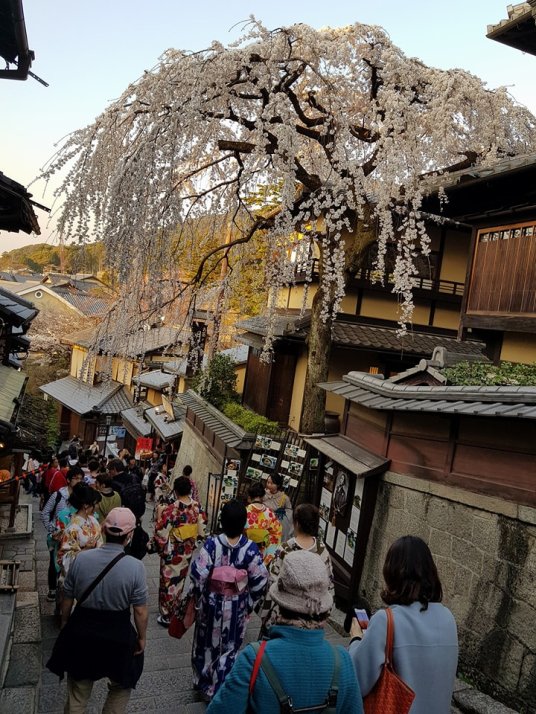 Fushimi-Inari is known for its 10,000 torii gates and 12,000 steps. Our group took on the challenge and completed the climb to the peak of Mt. Inari. You can see a view of Kyoto from the summit. 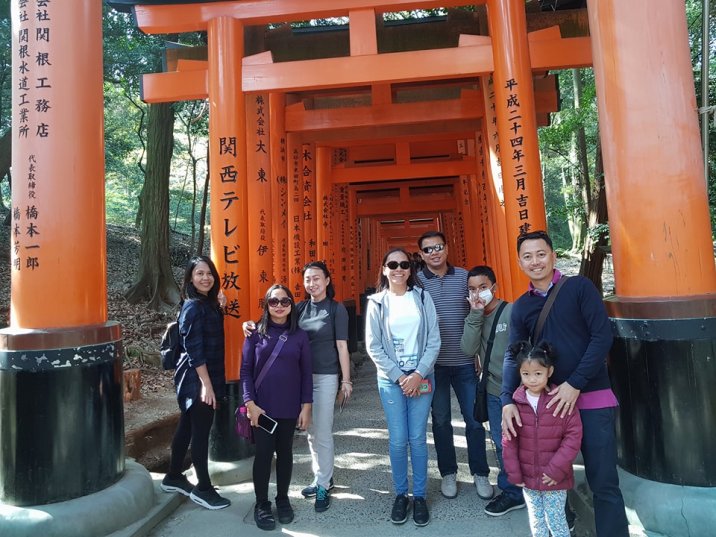 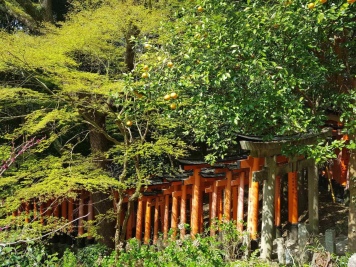 This temple is also known as the Golden Pavilion.

Unfortunately, we had to skip Nijo Castle because of the very long line at the ticket counter. We were only able to take a picture at the gate. 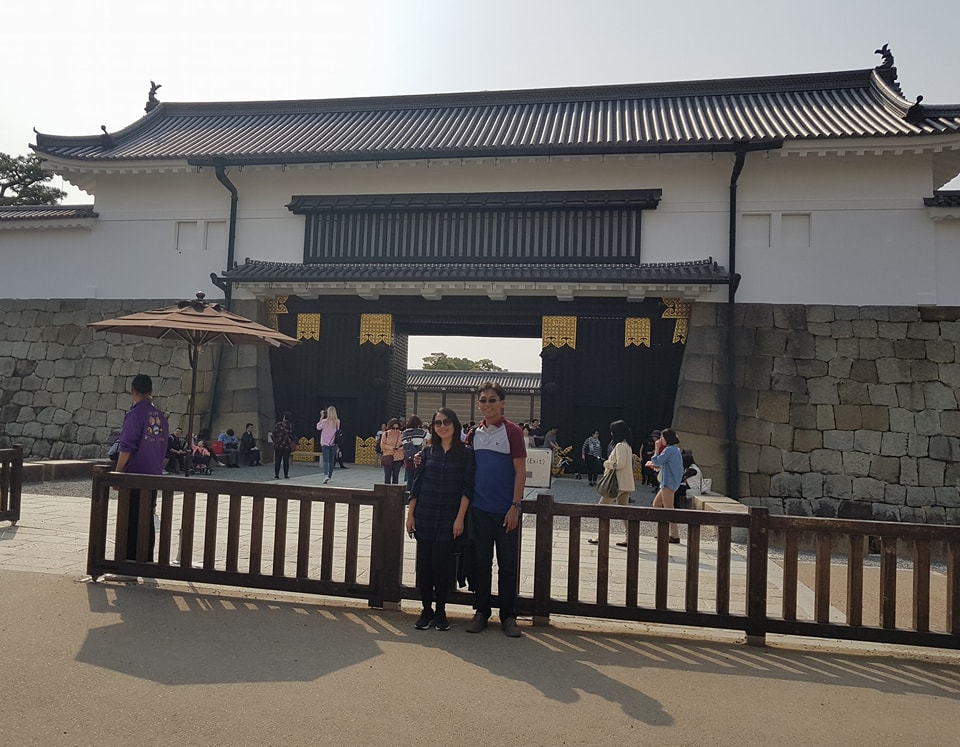 The cherry trees were not yet in full bloom when we visited, but they provided a pretty scenery nevertheless. 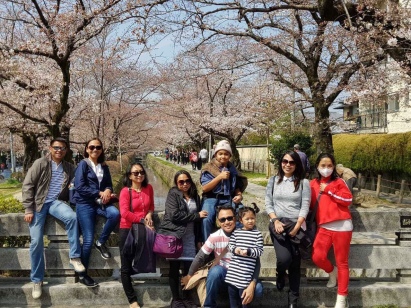 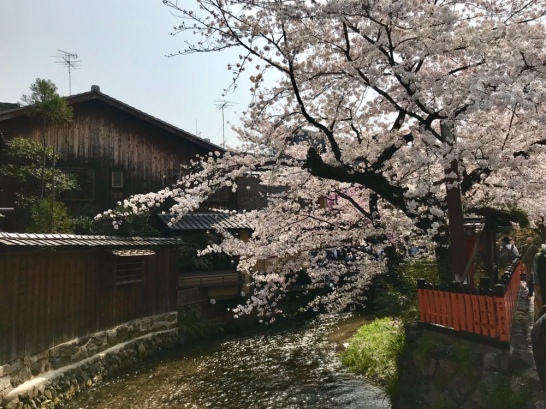 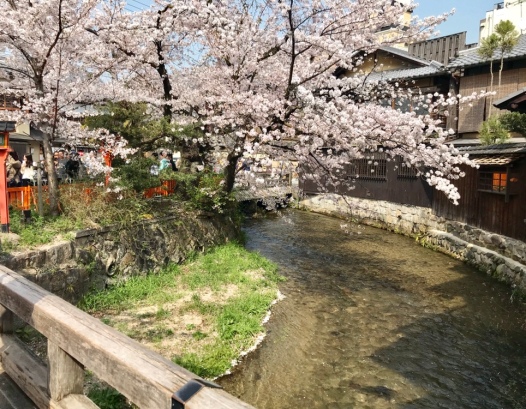 We did a little bit of shopping for gifts – Japanese dolls and match-flavored Kitkats – since they were relatively cheaper in this area. We had lunch at Ichiran Ramen, which apparently is the best ramen in the world. We opted for their default set since we had a hard time figuring out how to order through their vendo machine 🙂

We were greeted by deers as soon as we got off the bus. We thought it would be cool to feed the deers and have pictures with them. What we did not expect was their aggressiveness in ‘asking’ for food once they realized you have deer food (bought from vendors in the area) – at least two bit me in the butt and leg (proof below).

Just a few meters from the bus station is the impressive gate to Todaiji temple.

Inside the big gate, you will have to get a ticket (¥800) to enter another gate to the Buddha Hall.

Instead of another day in Kyoto, we decided to go to Kobe to get a taste of their… kobe beef!

One of the areas to get a taste of kobe beef without breaking the bank is at Kobe Chinatown. 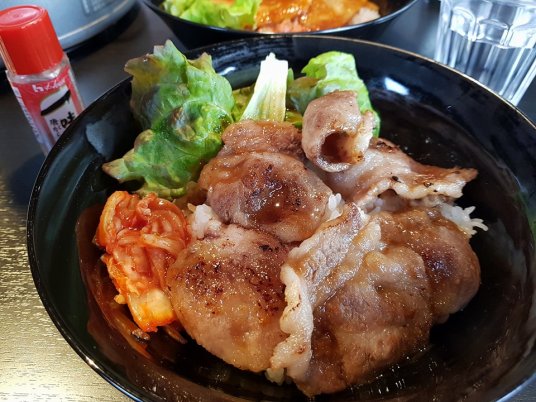 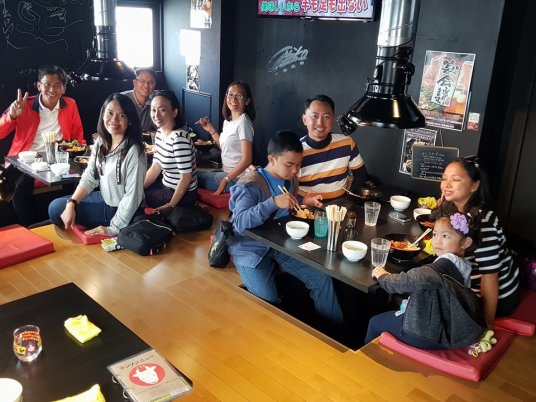 We initially thought of just strolling around the city area after lunch. Then, we came across an article about Mt. Rokko and the cable ride to get there. So, there we went. 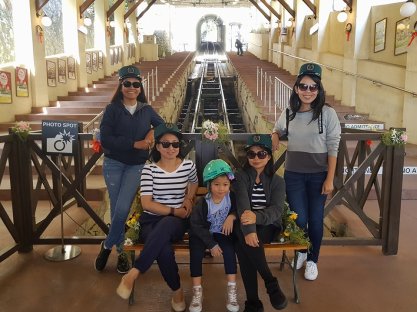 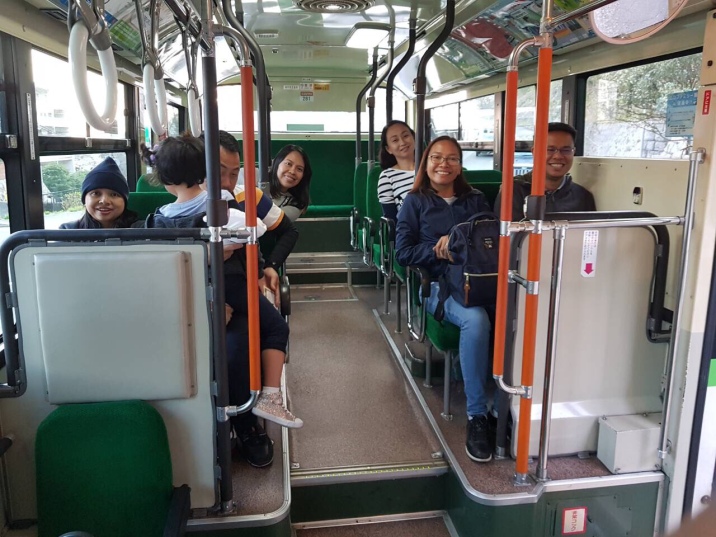 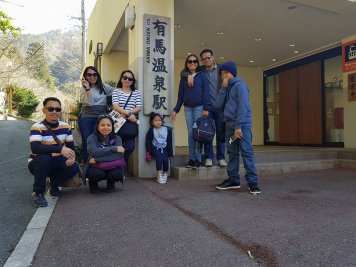 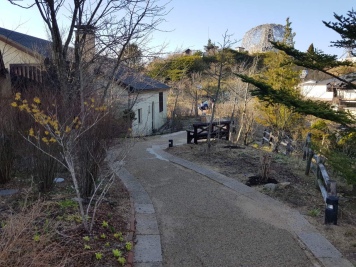 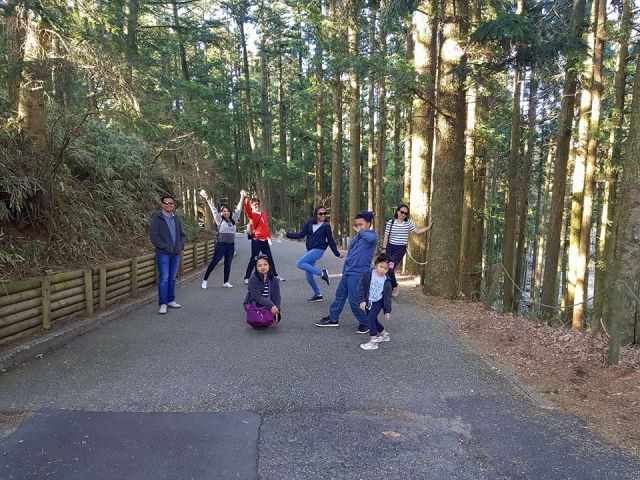